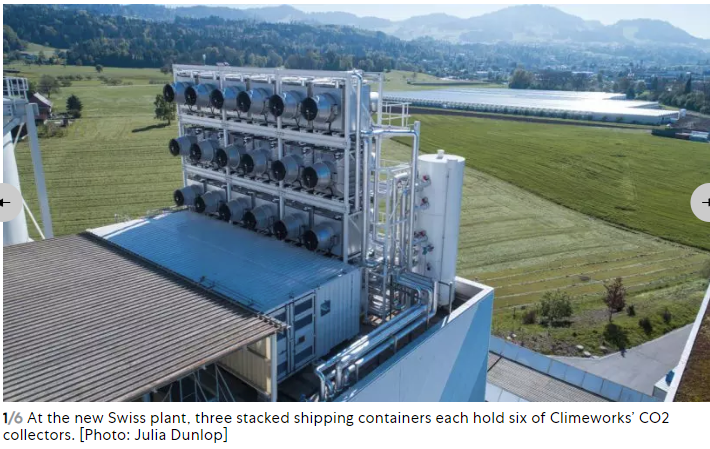 I came across an article recently about Climeworks, a Swiss company who is manufacturing machines to extract CO2 from the air.  The machines look somewhat like a jet engine (see below) and they saturate a filter with the CO2, then extract it from the filter by heating it.  One jet engine looking module extracts 150 Tons of CO2 annually from the air.  Which sounds like a lot until you consider that the average automobile produces 6 Tons a year.  But it certainly isn’t nothing, either.

I like the idea of CO2 extraction since no one needs to change their behavior.  Climeworks intends to sell the CO2, and potentially partner with the customer to locate the CO2 collectors close to the point of use, which improves the economics.

After reading this article, I wondered, why not just split the molecule up into carbon and oxygen, the elemental components of CO2.  It turned out I was not the only person ever to wonder this.  Because you are essentially reversing coal combustion when you do this, which requires a tremendous amount of energy, according to James E Miller in Scientific American.  Miller was explaining this because his group at Sandia National Lab was working on technology to use concentrated solar power to do this.  The last press I could find on this project was from 2009, which said that the technology is 15-20 years from commercialization.  Apparently, it’s not easy to do.

So I did a little more digging–was anyone else (hopefully, with a little quicker market cycle) trying to build carbon dioxide removal machines?  There is a company called Carbon Engineering, partially owned by Bill Gates, which has similar technology to Climeworks.  I read a New Yorker article, Can Carbon Dioxide Removal Save the World, by Elizabeth Kolbert, which discusses the company and the history of the concepts behind the technology.  Klaus Lackner, a physicist who developed the early concepts, says that carbon dioxide should be treated like any other waste product.  “We don’t expect people to stop producing waste.  Rewarding people for going to the bathroom less, for example, would be non-sensical.”  But he goes on to say that carbon dioxide has become a moral issue and thus, polarized, which compromises forward progress on how to deal with it.  Lackner sees carbon removal technologies as a key strategy, but, he says, “we are still very early in this game.”  Hopefully, the game will continue and pick up speed.