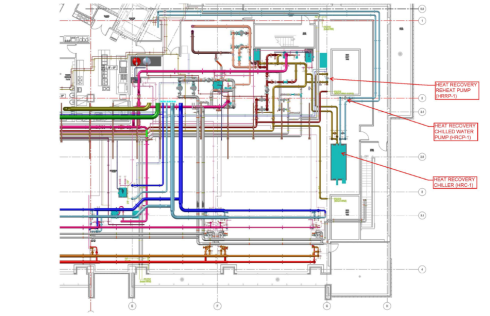 This is an expanded version of an earlier post.

A heat recovery chiller is a traditional screw type chiller where the heat of condensing is absorbed by a heating water loop.  Typically, the temperature of the water produced by the heat recovery chiller is not high enough to do stand-alone heating, so it supplements the heat produced by a boiler.  The higher the temperature of water produced by the condenser, the lower the efficiency of the refrigeration side of the system (a higher kW/ton will be needed to produce chilled water).  So a heat recovery chiller is best utilized in a lower design temp, larger delta T heating system, where the condensing water heat can be used to pre-heat the return water from the heating loop (prior to going through the boiler).  The main requirement for using heat recovery chillers in a way that saves energy is that the building has a year-round cooling and heating load. Considering only the water chilling mode, a heat recovery chiller is not that efficient (0.75-0.9 kw/T vs. 0.6 or lower for a typical centrifugal chiller). It’s only the production of chilled water with the accompanying production of heat which makes this a good technology to reduce the site EUI (energy use intensity). Also, the heat recovery chiller should be base loaded, i.e. the first chiller in line to be used for chilled water. The more loaded the chiller is, the better the system EER, a parameter which factors in how much energy is used to produce the total energy out compared with the total energy in. The goal with a heat recovery chiller is to operate it such that the maximum EER is achieved for the maximum amount of time. This will only be possible for a building which has a year-round heating and cooling load which match the full capacity of the chiller.

Figuring out to control the heat recovery chiller to maximize energy savings required effort.  Though the chillers came with individual control valves on each chiller module, these proved too include in the control sequence.  The inlet water temperature varied daily and seasonally, so the control valves on each chiller module (6 total modules for the 250 T machine) operated best when they were fixed at 100% open, because reducing the flow across the module when the incoming water temperature was low would cause the modules to trip out on freezestat.  Also, after hydraulically modeling the system several ways, it was determined that the machine could be most effectively baseloaded by precooling return chilled water, rather than operating the machine in parallel with the other chillers.  This ensured that the full tonnage was utilized.  On the condensing side, the hot water produced also served to preheat the hot water return from the reheat loop, which was designed to operate at a lower temperature to maximize contribution from the heat recovery chiller.  Thus, all of the heat on the condenser side was able to be utilized, and the chiller was able to operate in its most efficient range.